$20,000 donation to kick start the year for drought charity 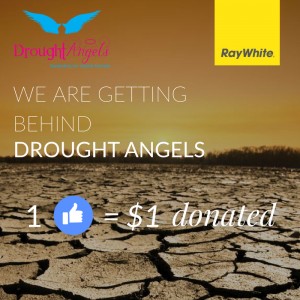 Ray White Rural and Livestock has made a pledge to donate $20,000 to Drought Angels to kick start the year in a new social media campaign.

It’s been five years since drought was last officially declared in Queensland, and today two-thirds of the state (around 120 million hectares) and 35 council areas in the state remain wholly drought declared. In New South Wales, the Hunter Valley and the North Coast face ongoing dry conditions.

“Drought is debilitating for our farms and other agricultural businesses. And the ripple effect into townships often goes unaddressed,” chairman of Ray White Rural and Livestock Paul White said.

“We’re getting behind Drought Angels again this year because they’re doing quiet, critical work for individuals and communities in need. As most people know, when times get tough on the land, farmers and families often don’t ask for help,” he said.

The organisation is run out of Chinchilla, Queensland and supplies farmers with prepaid Visa cards, locally purchased vouchers, fresh produce and store credits to be spent within their own communities during times of drought or natural disaster.

“We supply affected farmers with a means to access day-to-day goods in the local community, and as a result they’re able to support the small businesses in keeping their doors open for business during tough times.”

Tash says that even though we’re not hearing about drought in the media much, it’s impact is devastating and far-reaching across much of Queensland and pockets of New South Wales.

“Below average rainfall is resulting in many properties reducing stock numbers, completely destocking or worse; selling and walking away from years of generational heritage. Due to low rainfall farmers are daily carting water and feed to keep their stock alive,” she explains.

Ray White Rural have again partnered with Drought Angels to help the organisation achieve its aims.

“To help Drought Angels kick start their year we will be making a donation of $20,000 for 20,000 likes on our Facebook page,” Mr White explains.