“At the centre of a secluded oasis it feels like there’s no-one for miles – but with the added bonus of having the local barista just eight minutes away,” the agent said.

“A 25 minute commute will take you straight to the office in the Canberra CBD and in 12 minutes you’ll be on a flight out of Canberra International Airport.”

“There’s only been four properties of this calibre in the immediate area that have hit the market in the past year. This is no ‘prime land saddled with a tired, old farmhouse’ kind of situation.” It wasn’t always the case though. Owner Mark Edlund bought the property 18 years ago and quickly evicted the tenants. There were smelly, dirty and tracked hoofprints through the bedrooms. With the sheep gone, things improved but the 70s design remained.

Eight years later he set about renovating the entire home, farewelling all things mission brown. The 18-month project saw the house gutted and remodelled, while keeping the foundation and its orientation on the block. The modern architecture crossed with the country homestead and extensive outdoor living options brought to life the dream Mr Edlund had long-held for the property.

These days he says it’s pretty hard to beat the incredible 5am sunrises he takes in from the outdoor entertaining area before heading to work.

“The mornings here are spectacular. I’m a bird lover as well and the range of birds we have here is incredible. As the sun’s coming up it’s like a disco, that sound of the birds competing. That time of the morning is special,” he reflects.

“I don’t know many cities in Australia where you can have the lifestyle I have. I work 25 minutes away in the CBD and it’s pretty hectic but as soon as I’m home, I’m switched off and I become a hermit.

“I can’t see the lights of Canberra and I could be in any rural setting but to have that proximity to an economic centre where you can run a good business is a unique thing.” 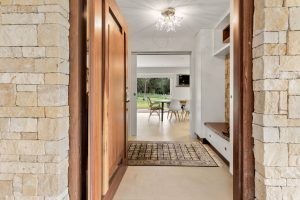 And who does he imagine stepping into his boots at Karanya? A horse lover comes straight to mind. The property features equine fencing, two round yards, a dressage arena, a steel holding yard, six shelter sheds and a deep, drought proof bore.

The five bedrooms also lends itself to a large family, while the NBN Satellite internet with Cat 5 cabling throughout the home means an executive style worker will have no problem putting in the hours on the laptop while taking in the panoramic views.

Either way, whoever ends up making the trip up that one-way driveway towards the Karanya homestead will have landed their rural paradise – with brunch nearby of course.