Looking at lifestyle, cost and house prices, Mr Southwell has posted a ‘research’ video today, ahead of this Saturday’s auction of a sprawling five-bedroom, three-bathroom home called Cotton Wood Grove.

“Boorowa is a fantastic town on the New South Wales southwest slopes, with a population of only 1200 or so,” Mr Southwell said.

“I get the allure of country kids heading to the city, but I thought we should compare the pair, as they say.”

The video is titled ‘Boorowa versus Bondi’. 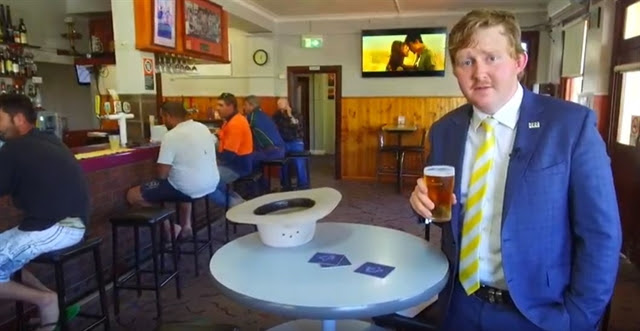 “Just recently, I’ve had some mates try to convince me that I should move to the city, to experience life living in Bondi in Sydney…so today we’re going on a field trip. It’s Boorowa versus Bondi,” the Ray White Canberra Yass real estate agent said.

Mr Southwell starts out comparing swimming holes; first the lush grassy banks of the Boorowa River on a sunny day without a neighbour insight.

The video then cuts to a cloudy day at Bondi where a signpost points to threatening currents and Mr Southwell’s rural attire attracts confused looks from backpackers.

He heads to the Boorowa grocery store, where the friendly checkout assistant Lilly carries his purchases, enjoys a cup of tea at a nearby coffee shop where the waitress knows his name, and orders a beer for $5 at the local pub; considerably cheaper compared to an $11 schooner in Sydney. 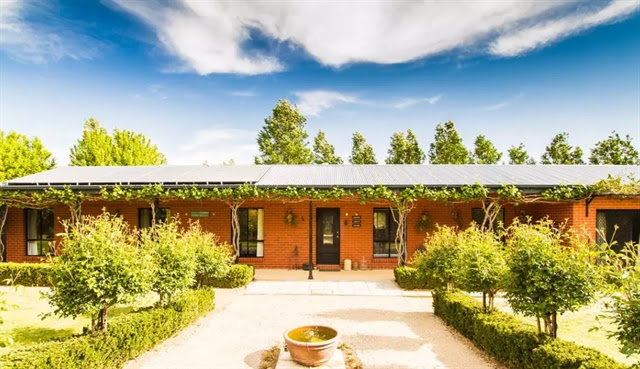 The modern brick veneer steel framed 2007 home (above), with a separate self-contained granny flat, is surrounded by established gardens on 1.068ha*.

“Located on outskirts of Boorowa, you’re less than an hour-and-a-half from Canberra and only 30 minutes from Yass,” Mr Southwell said.

“The manicured garden is broken into many ‘rooms’ featuring established trees, there’s a fish pond, a gumtree forest, pergola, established orchard, expansive parkland style lawns, greenhouse, irrigation by a micro sprinkler system and drippers, as well as a barbecue area. The property has elaborate dog yards and a chook house, and a granny flat.”

“If you wanted anything like this in terms of style, space and features, you’d be up for millions upon millions in Bondi,” he said.

This isn’t the first time  Mr Southwell has used a quirky video to market a property.

Late last year, he did a ‘Five reasons not to buy’ video to market a Bombala property, which sold within a week of the video going online.

To watch the ‘Boorowa versus Bondi’ video, CLICK HERE