IT’S BEEN more than a year since the devastating 2019-2020 bushfire season during which countless Australians stepped up to help their neighbours and local communities.

Many of these heroes have been recognised for their selfless efforts through the 2020 Hidden Treasures Honour Roll including Ray White Tumbarumba principal Mellisa Melli.

The 2020 Hidden Treasures Honour Roll is an annual initiative of the Department of Primary Industries’ Rural Women’s Network. It recognises the outstanding efforts of women volunteers in NSW and promotes the valuable role of volunteering to the community.

Ms Melli, a Canberra native who moved to Tumbarumba eight years ago, was instrumental in helping her community recover from the bushfires that wiped out the town and surrounds. The Tumbarumba woman said the bushfires had an enormous impact on the community with so many losses of property and livestock.

“The devastation was hard to understand and even harder to live through especially for those directly affected,” Ms Melli said.

“The entire town, hospitals and prison camp were evacuated with only a few paramedics on hand until the army set up a makeshift hospital along the creekscape directly behind the Main Street.”

Ms Melli added that the town’s power was “held together with chewing gum and sticky tape”. Shortly after power was restored to some parts of the town, a bird flew into one of the lines and again the power was again down for a few more days.

Her friend Catherine Marriott nominated the Ray White Rural Tumbarumba principal and wrote in the nomination pitch that Ms Melli single-handedly recognised that the need for support was extreme. 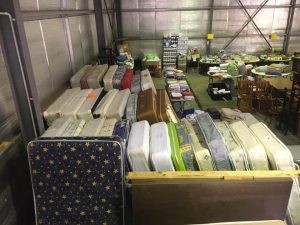 “She took it upon herself to find an empty shed in town and turn it into a refuge centre, called out to her nationwide networks, and was responsible for pulling together two floors of furniture from a fancy hotel in Sydney, truck loads of drinking water and new clothes/personal products by the truckload, all so she could disperse them to the people who had lost everything, she even organised the transport,” Ms Marriott wrote of Ms Melli in the nomination.

“She also worked through the nights for the 50 days of the fires, washing the volunteer firefighters’ clothes for them, organising food and cooking for them, and ensuring generators were bought into town and put where they were needed as our town was without power or communications for two weeks.”

But Ms Melli was quick to say that the contribution was a team effort and the generosity of people and communities most certainly restored her faith in humanity.

“I approached all of our vendors with vacant houses and the kindness that came from them removing their properties from the market to home families that had lost their own homes was kind and humbling,” Ms Melli said.

“Each day I called in past the RFS shed and the Red Cross centre in town to collect any washing from visiting volunteers as we lived out of town and had generator power to our home.

“This is not something I set out to do for any recognition and in my opinion I feel and know there are much more deserving people, I am humbled by the recognition and have learned to say thank you.

“This was such a team and grand effort by all who helped during and after I feel all should be acknowledged so within my nomination I share with all that worked tirelessly to help our town and the ones we love.”