REGISTERED bidders from across the nation competed for 237 lots at the 45th annual Ray White Equine Dalby Stock Horse Sale, with sales under the hammer totalling more than $1,500,000, culminating in a clearance rate of 78 per cent.

The top sale price was achieved at auction twice, while a passed-in lot later made the same money, selling for $35,000.

Buyer of the top-priced gelding (lot 22) Hazelwood Billy The Kid (pictured above) sold to Evan and Kim Acton from Mullungera Station in Julia Creek, Queensland. T and G Dwan from Warwick Queensland was the vendor of the ten-year-old gelding, sired by Hazelwood Conman.

Hazelwood Billy The Kid is a competitive gelding winning maiden, novice and open campdrafts. Mr Acton will continue to campdraft him as an open company gelding.

“This year at the Stock Horse Sale we catalogued 237 horses, and despite 41 withdrawals due to the current dry conditions, it hasn’t diminished the opportunity for buyers to purchase first-class horses from all over the country,” Ray White Dalby Principal Roger Lyne said.

“The quality is simply outstanding, with nothing but good feedback for the 45th year.” 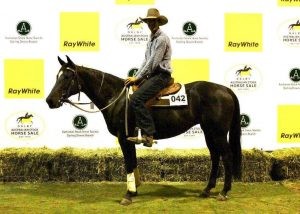 Buyer of the top-priced mare (lot 42) Meadowbrook Magnolia (pictured above)) sold to Adrian and JJ Lamb from Taroom in Queensland.

Corbould Oakdene Pty Ltd from Ramsey, Queensland was the vendor of the nine-year-old mare, sired by Acres Destiny. ‘Maggie’ is a quiet, well-going mare ready to hit the campdrafting ring with all the breeding behind her.

Buyer of the top priced stallion Bighouse Matlock sold for $21,000 to PM and MM Hill from Clarke Creek, Queensland. Craige and Belinda Ellrott from Morinish in Queensland was the vendor of the four-year-old, sired by Fern Hills Bennett.

The seven-year-old Romeo Kitty mare (Lot 112), was earlier passed in for $26,000 and later sold during the sale for $35,000 to Marcus and Shelly Curr from Yelvertoft Station, near Mt Isa from vendor Bill Carey.

Ray White Rural Managing Director Stephen Nell said the network support came from far and wide to ensure the success of the event.

“Ray White is the largest family-owned real estate company in Australia and it’s uplifting to see so many of our members within the rural network pull together and participate in ensuring our clients are receiving the best results,” Mr Nell said.

“As with all aspects of our businesses, the customer is our priority, and we make sure our vendors and buyers receive the best outcome possible.”

“On behalf of the Ray White Dalby office, we cannot thank our Ray White Rural network enough for assisting throughout the event, from the office to the auction stage,” Mr Lyne said.

“Livestock and rural agents came from Townsville to Bathurst, and as far west as Longreach. This massive event wouldn’t have gone ahead without the mustering of all the troops.”

The office was abuzz with vendors, potential buyers registering for bid cards and agents with Ray White Rural Dalby’s leading team of professionals.

Recognition of the longest serving female in Ray White Rural