Write your own bush ballad in this bowning business and home

A cafe, gift store, shopfront and home steeped in Australian literary history has hit the market this month.

In Bowning, within an hour of Canberra, Henry Lawson and Banjo Paterson would discuss poetry and politics at ‘Albury House’ and ‘Mayfield Mews’; properties which are now headed to auction. Both Paterson and Lawson are reported to have penned a number of works for The Bulletin magazine during regular stays between 1899 and 1913. Both authors would then dispatch their written works to Sydney by rail from the Bowning Railway Station, to be collected.

Agent George Southwell of Ray White Rural Yass and Canberra said he expects a young couple making the most of the shift toward remote work will be attracted to the property.

The two separate titles include commercial shop fronts that over the years have been general stores, an upholstery & curtain making business and later an antiques and collectables centre, behind which are the charming old stables and the original coach house that have been converted into a cafe, gift shop and nursery. 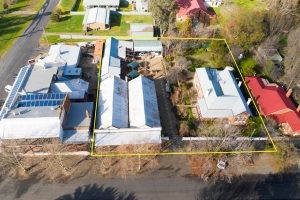 While the size of the block, some 2200sqm, large windows and 100 year old fig tree are attractive attributes, it’s the multiple income streams that are the most distinctive characteristics of the property, according to the agent.

“A savvy operator could make Albury House into a beautiful bed and breakfast, while giving a new life to the cafe and gift store which are offered fully equipped, getting the once popular nursery going again and leasing out the two large commercial spaces on the street.”

“There are five leasing opportunities in the one purchase.”

The community is a popular tourist stop and Mr Southwell estimates around $65,000 in leasing revenue could be derived from the properties.

Current owners John and Averel Rogers are selling the property for family reasons & health matters. “We hope the new owners are people who’ve long desired to move to the country and run their business. Everything you need is here: high speed internet, power and so on, but the cost of living is far lower and at the moment, many of Bowning’s locals are enjoying their time without the commute to Canberra for work each day,” Mr Rogers said.

Whilst various owners over the years have sympathetically restored the property, the history remains evident in the 12 ft ceilings in the front and back of the home, and the hardwood timber floors and ceilings.